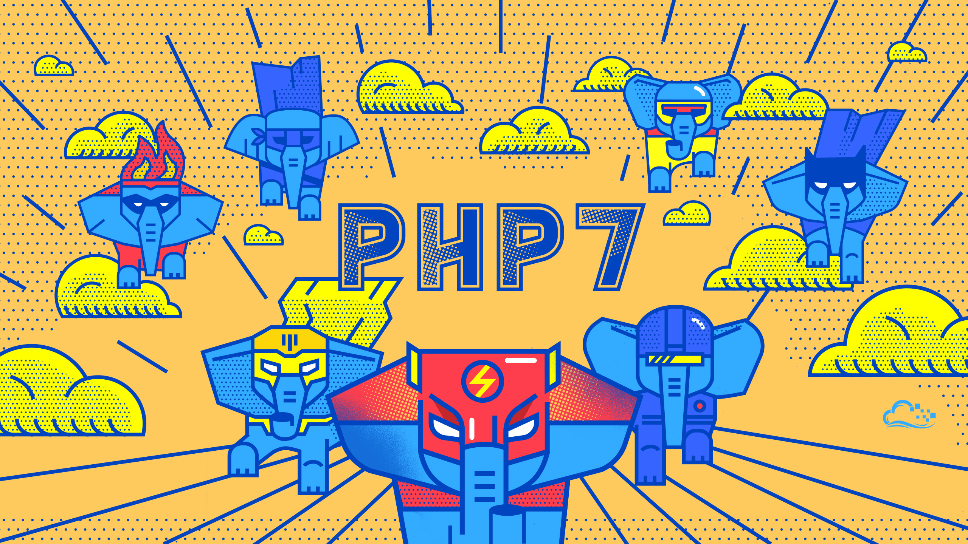 PHP 7 is coming, soon. The current planned release date is November 12 2015 and so we are counting the days. Next week will see the release of Release Candidate #5 and the end of October will see the final Release Candidate, #6. For those readers who know their server setups, you will be using one of the PHP5 series, hopefully 5.5 or 5.6, as 5.4 and earlier are all End of Life, meaning no support or security fixes.

So, what happened to PHP 6?

It was to be an evolution from PHP 5. It had been planned to release a final version of PHP 5 and then release PHP 6, all the way back in 2010. It didn’t happen. In fact, it all went horribly wrong. The good features of PHP 6 that could be ported to PHP 5 were, and so we have PHP 5.6, which is quite different form the first release of PHP 5. This blog post covers the salient points of the argument as to what to call the next major release of PHP. A vote was held, and PHP 7 emerged the winner.

Yes, because (most) existing PHP 5 based code will run fine in PHP 7. WordPress developers have been checking their code base against the PHP 7 nightly builds for over six months and have announced that, as of November 12 2015, WordPress will officially support PHP 7. For others, there is a code checker that will scan your php for problems. Great, so what can we, the site builders, expect?

How will I be effected?

The first issue for most of us, without the technical know-how, is that we will have to wait for the ‘stack’ builders to make versions that include PHP 7. The stacks that are used on local computers for development, like WAMP, will appear very quickly. However, the majority of production sites are based on the cPanel software stack/hosting platform. The bad news is that cPanel have said that their EasyApache 3 software installer will NOT support PHP 7. For that we will have to wait for the new version; EasyApache 4.

My server has the latest version of cPanel, 11.52, and that has a very flaky, experimental version of EasyApache 4. So, given that cPanel 11.52 is only a few weeks old, I expect that cPanel 11.54 will see the light of day in the new year. Then we site builders might see PHP 7 in early 2016, assuming that EasyApache 4 is stable by then.

More importantly, EasyApache 4 allows hosts to potentially offer different versions of PHP to their customers on the same server, which means some hosts may become a lot more flexible when it comes to saying ‘Yes’ to those who want the latest version of PHP, whilst still leaving those who want to stay in the dark ages of PHP 5 to remain there. But, if you already have access to the cPanel WHM software, as those of you with dedicated servers (like me) or VPS accounts will, you will be able to make that decision for yourself.

Aside from all the technical stuff, will we see a difference?

The simple answer is, ‘Yes.’ In processing a server request for a WordPress page, PHP 7, which uses Zend’s phpng engine, early benchmark tests showed it did this around 2x faster than PHP 5. Chances are, by the time it ships, PHP 7 will be on a performance par with Facebook’s HHVM. Your server will still have to send the assets for that page through the same network, so that will not speed up, but at least WordPress will be much faster … and about time too. Evolution or Revolution? Certainly a massive improvement.

Trevor is the head of support and testing at Ultimatum Theme and owns a WordPress-based web design business called CDNWebDesign. He has been programming since the 1970's and web designing since 1999. In his spare time, he likes to take scenic photographs in the beautiful Cotswolds in the UK.

I never understood what all the hoopla over WordPress was about as it struck me as cumbersome and not very versatile design-wise. Then I found Ultimatum and am able to very happily replicate my Photoshop web page comps. The CSS is totally customizable and content can be easily dropped in and moved around. Plus, the user forum offers skillful advice in a superbly timely fashion. Wow, you’re really helping my business as a web designer for clients who need to be able to manage their content themselves. Thank you!

…I am closing in on a second site built with Ultimatum and am getting ready to begin a third one soon — am psyched!